Let me introduce myself. I’m Diego Carbajo, a postdoctoral researcher of the University of the Basque Country (Spain). I have been working at RMIT’s (Melbourne) School of Education with Peter Kelly since 2017 on a research project titled The Grammars of Self-entrepreneurship in the Basque Country from an International Perspective y project develops the hypothesis of the emergence and stabilization of a “Grammar of Self-Entrepreneurship” aimed at young people on a global scale. A global grammar that is not posed as a culture or an ideology, but something closer to a discourse, an apparatus or an assemblage that helps us to understand not only how young people are incited to behave and act in certain ways, but how we are induced to perform a certain type of individuality in what has been called the Anthropocene.

This post extends on previous posts on the Arts-based Social Enterprises and Marginalised Young People’s Transitions project blog, and an upcoming article in the journal RECERCA. Revista de Pensament i Anàlisi.

To start with and without going in depth now in the necessary critical review the notion of Anthropocene (Moore et al, 2016), that enterprise is one of the common categories and subjective imperatives (to become entrepreneurial, to self-monitor oneself as an enterprise, to behave like an enterprise, etc.) of the 21st  Century seems a quite strong working hypothesis (Foucault, 2008). 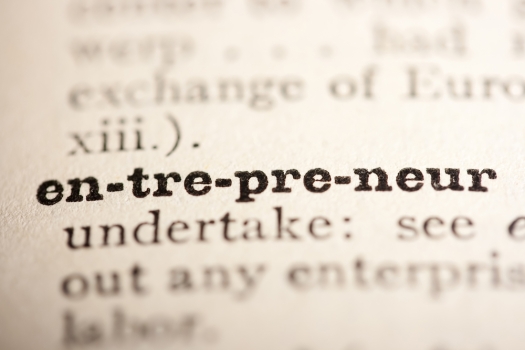 In fact, there are common elements of some governmental policies about self and social enterprises that connect geographically, culturally and politically distant places such as Victoria (AUSTRALIA), Scotland (UK) and the Basque Country (SPAIN). My aim here is to sketch an entry point to the Global Grammars of Self/Social Enterprise departing from the following research questions:

How have the concepts of self and social enterprise have been developed and deployed in various governmental spheres? What kind of governmental circuits do they emerge from and are subject to? Do they have a structure and/or obey to any rationale? What kind of uses and meanings have they acquired? How are these concepts downloaded? How is that vocabulary framed in local territories? Is the Anthropocene a proper framework to work in that direction? Will (social-, eco-, radical-) entrepreneurs ‘save us from’ or ‘give solutions to’ the problems posed by the Anthropocene (for instance)?

Of course, this is a big endeavour for some blog entries. So, I will settle for drafting the core ideas and trends that are important here and I will be happy to discuss them in the conference and/or forthcoming works.

On the global production of entrepreneurs

First of all it is worthy to note that one of the main agents that contributes to giving reality and continuity (Latour and Woolgar, 1986; Law, 2009, p.249) to entrepreneurship as an international phenomenon through a massive production of statistical data (Foucault, 2009, p.274) is the Global Entrepreneurship Monitor (GEM). Founded in 1999, this international agency operates as a global census of entrepreneurship and produces and circulates a range of indicators of entrepreneurship. In addition, it provides regional analyses, international comparatives and different state rankings that contribute to making entrepreneurship a standardised and measurable global phenomenon (Osborne & Rose, 1999). Its work is not limited to conventional understandings of entrepreneurship and its area of action has been expanding quite significantly. This agency is taken as a trustworthy data source by academics, journalists and diverse agencies, but more importantly, it is taken as a reference by policy makers, states and organizations such as the OECD and the European Union that need to measure quantitatively, and to some extent, performatively produce and standardize, entrepreneurship (Law, 2009, p.248). And it goes without saying that youth, as an un-problematized ‘population segment’, is one of the ideal subjects of this grammar (Serrano & Martín, 2017). My intention here is not to go into great detail about GEM, but to take it into account as an international agent in the production of representations of entrepreneurship in the Anthropocene.

Although there are differences in its member countries, focusing on the European Union (EU), it establishes the foundations and the directives for the employment, entrepreneurship and social enterprise policies implemented by member states. It is apparent that these policies are based on a strong market oriented rationale where entrepreneurship is not only directly associated to job-rich recovery and prosperity, but as an agent that is capable of giving solutions to all kind of social, cultural and environmental problems and needs. Indeed, as all of these objectives are aimed at individual entrepreneurs, and at Small and Medium-sized Enterprises (SMEs), they create a sense, often ambiguous, that an enterprise as an institutional product is both a personal quality of (initiative), and/or that individuals contain the qualities of an enterprise (Armstrong, 2005, p.6). This ‘grammar’ is evident in crucial political spheres  such as the European Commission Website. The definition of entrepreneurship that this institution establishes is close to an attitude, a skill and to a moral disposition:

Entrepreneurship is an individual’s ability to turn ideas into action. It includes creativity, innovation, risk taking, ability to plan and manage projects in order to achieve objectives.

But more importantly, this definition is wide and ambiguous enough to include in it those self-employees, social enterprises and all kind of collectives (especially young people) who, after the Global Financial Crisis (GFC) are defined by various EU agencies as a priority groups that require urgent intervention.

On the other side, with regard to Social Enterprises (a notion that as such, has emerged quite recently in the Basque Country), it is interesting to note how they are defined by the European Commission, and how the adjective of entrepreneurial situates both entrepreneurship (as a disposition, but also as a particular type of person) and social enterprises in the analytical framework we could name as grammars of entrepreneurship for the Anthropocene:

A social enterprise is an operator in the social economy whose main objective is to have a social impact rather than make a profit for their owners or shareholders. It operates by providing goods and services for the market in an entrepreneurial and innovative fashion and uses its profits primarily to achieve social objectives.

The call for persons to be, or to become entrepreneurial is a cross-cutting issue in all the different political programs regarding employment, and gives shape to an apparatus (Foucault, 1980, p.194-195) that has been analysed in several works (Kelly, 2013; Bröckling, 2016).

In this frame, youth becomes a paradigmatic case of these governmental processes both as an object of intervention and as a producer of solutions (‘change makers’) for the challenges posed by the Anthropocene. Close to a biopolitical program (Foucault, 2008), youth becomes an object of intervention when we identify arguments that suggest that entrepreneurial learning promises the most significant and important solution to improve young people’s employability (Serrano & Martín, 2017). Close to a promise of salvation, youth is understood as the subject of social change that brings innovative solutions to all sorts of problems.

The grammars of entrepreneurship in the Basque Country

Two of the multiple problems that the EU is facing are continuing high unemployment rates, and employment precarity among young people. In the case of Spain, these indicators were scandalously high during the GFC that began in 2008, especially for the young (Eurofound, 2015). 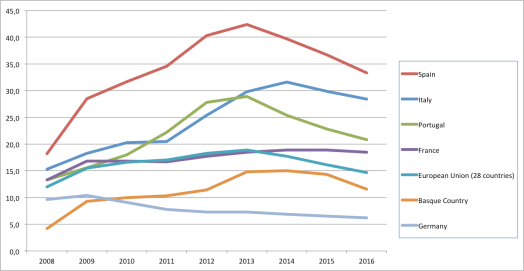 According to Eurostat (2016), the rate of youth unemployment (in the 15 to 29 age range) in Spain reached its peak of 42.4% in 2013. In 2016, the youth unemployment rate of 33.3% was, along with other Mediterranean countries, still one of the highest in Europe, over twice that of the EU-28 average. In the case of the Basque Country, these rates were lower. According to the Basque Youth Observatory, while the peak of youth unemployment was reached in 2014 with a rate of 29.5%, in 2017 it dropped to 15.1%. It is also worth noting that even though the unemployment rates in Spain’s are lower nowadays, the temporary employment rate in 2016 stood at 57.4%, the highest in Europe, in contrast to the EU-28 average of 32.5% (Eurostat, 2017).

In regions such as the Basque Country it is quite easy to find how the local policies and programs about entrepreneurship and social enterprises closely align with the directives of the European Union without any mediation of the state government. The Basque Country Government’s general plan, based in its own Law for the Support of Entrepreneurs and Small Businesses, has been recently updated until 2020 with a budget of 295 million euros. The determination of the Government with regard to the broad notion of entrepreneurship we have previously mentioned is clear, even though, according to GEM, in 2016 the Basque Country had one of the worst TEA (Total Entrepreneurial Activity) scores of the last decades at 3.3% (Hoyos et al. 2017). The overlap between youth and entrepreneurship becomes even more analytically challenging since the Lehendakari (The President of the Basque Government) has recently announced that youth is one of his government’s five prioritized and strategic fields in what remains of his mandate. All in all, both fostering entrepreneurship and “making young people’s lives easier” or bringing them back to the Basque Country can be posed as a biopolitical  problem of government faced by Basque institutions around the issue of “not governing too much” (Foucault, 2008).

The low rate of entrepreneurs in Basque Country contrasts with the massive competitions for different positions in the Basque Government Institutions as officials and civil servants. Bilbao Exhibition Centre, photography by Alfredo Aldai/EFE.

Thus the Basque Government seems to be concerned and aware both of such ‘numbers’ and ‘resistances’, as well as that it is competing with other European regions for this niche —and the resulting European funding. As a result, the last update for the entrepreneurship program has been presented with the main goal of positioning Basque Country as a privileged place to create and develop all kinds of new entrepreneurial initiatives.  Overall, and in line with the European directives, the main intention of these policies is to ‘recover, generate and reinforce an entrepreneurial culture through generating an ‘entrepreneurial ecosystem’.

‘Entrepreneurial Ecosystems’ of the Anthropocene

In this frame, and mainly focused on enterprise generation, social entrepreneurship appears as a variation of entrepreneurship linked to the notion of social innovation. Even though the earlier Basque Government program partially reproduces the European Commission one, a lower level in the Basque administration structure gives some hints about how it is understood. A quick reference to the Provincial Council of Bizkaia 2017 call for funding innovative and social enterprises leads to the idea that all of them have to acquire, if not the form, at least the outcomes and ‘attitudes’ of a conventional enterprise. Some of the limitations of this sort of approach have been sketched elsewherein the Art Based Social Enterprises Projects blog. But I would like to stress that beyond the social values that some social-enterprises might look for (environment and sustainability, justice, equality, integration, access to culture and knowledge, alternative economic models, etc.) they are mainly valued and judged by the ‘survival’ criteria settled by the market. Or if not, they will be evaluated as potential substitutes or externalized ‘resources’ of the Welfare State. So, are these different kind of enterprises, and the market driven framework they are ‘invited’ to survive in, the proper answers to the Anthropocene?

Lastly, in a very explicit way, we see particular dimensions of the moral economies of social enterprise come into view – something that is made quite clear in this Art Based Social Enterprises blog post. We see both the moral obligation that governments create for young people to be and become entrepreneurial. And, alongside this, we see an ‘investment’ in the promise of social enterprise framed by a sense that social enterprises, in taking on these responsibilities, will enable ‘savings’ in the State’s obligations to develop and administer not only labour market programs and welfare payments but also, environment related issues posed by the Anthropocene

BRÖCKLING, U. 2016. The Entrepreneurial Self. Fabricating a New Type of Subject, London, SAGE.

KELLY, P. 2013. The Self as Enterprise: Foucault and the Spirit of 21st Century Capitalism, Surrey, Ashgate/Grower.